A four-legged piece of the Harry Potter legacy is up for adoption! If you’ve got a loving home and kibble to spare, Padfoot, the dog who once saved Harry Potter’s life, can be yours. 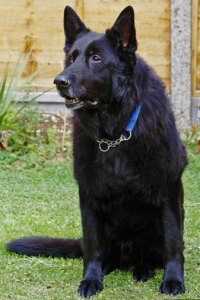 A Harry Potter dog is up for adoption! Once hailed as a hero for his role in Harry Potter and the Prisoner of Azkaban, the acting pooch known as Padfoot is now homeless.

The German Shepherd that played Sirius Black’s animal form (off-screen name is Shadowberry) can no longer be cared for by his owner, Paul Thompson. Citing a lack of time at home to be with Padfoot, the stuntman has put the dog up for adoption in Britain.

“I found myself spending a lot of time away from home,” Thompson told The Sunday Express. “The dogs needed more attention then I could give. It was a difficult decision to make but one I had to accept was best for the dogs.”

Along with a photo of the four-legged star (seen here), an essay ‘written’ by the Harry Potter dog on a German Shepherd Rescue web site reads:

My real name is Berry, Shadowberry, and I am now 10 human years old. Many dog years ago I played the part of Padfoot in a big film that was watched by many people all around the world (or so my Dad told me). I haven’t seen it personally but apparently I looked pretty mean in it sometimes.

I am a German Shepherd and my Dad got me as a puppy. He did lots of exciting things like being a stunt man and animal training for films. That’s probably how I got my part. I love people and my best friend is Porridge who is 13 human years and who I live with. Porridge has also been in some films. Both of us are a bit wobbly in our older years but we still love life.

Think Berry the Harry Potter dog will have any trouble finding a home full of fans?