Chris Brown’s girlfriend is pregnant? Word on the web says the singer is about to become a father!

Need some Chris Brown baby news? The rumor mill was teeming Monday with reports that the 22-year-old is about to become a first-time father — reports persistent enough that Chris Brown addressed them on Twitter himself. 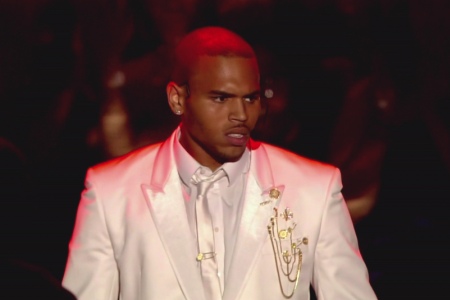 Gossip site Media Take Out leads the Chris Brown baby rumor, reporting they’ve confirmed that the singer’s girlfriend Karrauche Tran is pregnant with their first child. A photo that appears to show her sporting a bit of a baby bump accompanies the post as evidence, but it’s nothing that couldn’t be explained away as an awkward pose and camera angle.

Addressing the pregnancy rumors himself Monday afternoon Chris Brown tweeted, “And so we are clear @Karrueche is not pregnant!!! Lol”

Along with laughing off pregnancy reports, Chris has been tweeting about a fall he took during a concert Sunday night. The Forever singer first tried to downplay the incident writing, “Look at the video. I tried to play it off so smooth! I popped right back up! Keep it pushing like, ‘y’all didnt see [expletive] lol.'”

Then later, “Bust my [expletive] on stage last night! Hella rain but we had a great time!!!! Damn near broke my arm! Lol”

Despite the injuries the singer seems to be in a fine mood these days, at least judging by the “Lol’s” that conclude many of his tweets. Neither a mid-concert fall or pregnancy rumor can get Chris Brown down!