Look for a clash between Nucky and Jimmy — despite the fishing trips together — on Season 2 of Boardwalk Empire. 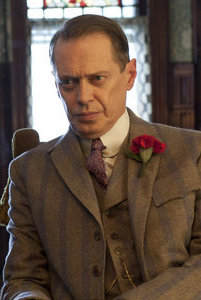 It was a family affair on the Season 2 debut of Boardwalk Empire on Sunday night.

Sure, the episode had plenty of the booze, bosoms and bullets the acclaimed HBO series has become noted for, but this week there was an underpinning of home and hearth. There’s Jimmy Darmody, playing daddy to his son while mom Angela is tentatively back in the fold. At least Jimmy’s mom Gillian is happy about the situation, although we do sense friction between her and Angela.

Nucky is playing father to paramour’s Margaret Schroeder’s young boy, who’s in a heap of trouble at school for playing with matches. The nuns aren’t happy with his behavior, and we get the sense that Nucky won’t be happy for too long, either.

Back to Jimmy, he’s being bucked up by his natural father, the Commodore, for a move against Nucky. Nucky, who was Jimmy’s defacto dad, senses something is in the works and gives Jimmy a statue depicting a father and son fishing scene to try to reestablish that bond. But Jimmy is not the sentimental type. He stashes the statue in the back of the closet.

Agent Van Alden’s wife is in town, and what begins as a cold and distant visit turns hot and heavy after she watches her hubby agent bust up a speakeasy. After she leaves town, however, he visits — cash in hand — showgirl Lucy Danziger (Paz de la Huerta), who is very preggers with his child.

We also got an home piano recital from Chalky White’s son and then there’s the scary looking Richard Harrow who spends his time cutting out photos depicting happy family scenes from magazines — when he’s not gunning down other gangsters.

As for the episode’s action, the Ku Klux Klan fired a machine gun into the garage of White’s gang and the repercussions rock the city. If that’s not enough for Nucky, he gets arrested for election fraud at the close of the episode.