The new ABC show Pan Am has cashed in on the 1960s TV trend and scored great ratings, despite mixed reviews from those comparing it to the Emmy Award-winning show Mad Men. 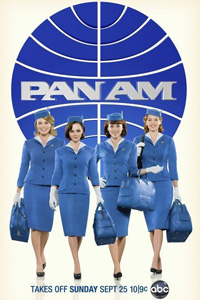 The show glamorizes the Pan Am stewardess and the adventure and fun of airline travel — before strict security rules took the fun out of it. Former Pan Am flight attendants told MSNBC that they felt like the show accurately represented what it was like being a stewardess for the airline.

“I liked the scene when they were ready for take-off and one flight attendant says to the new hire, ‘Buckle up. Adventure calls.’ That’s how it was,” said Helen Davey, who was a stewardess for Pan Am in 1965.

Former flight attendants may approve, but not all critics do.

“Pan Am seems most intent on making the idea of the ’60s and stewardesses and ‘the jet age’ more glamorous than real. It has neither the exactitude of the times nor the talent of the writers to get at the issues, a la Mad Men, that illuminate the issues of the day,” says Tim Goodman of The Hollywood Reporter.

Nancy Franklin from The New Yorker thinks you should possibly give the show a chance. “Pan Am has a bit of style to it, and a note of darkness, and the formula might just work,” she writes.

Tell us: What did you think of Pan Am?