Their run may be over, but Elisabetta Canalis and Val Chmerkovskiy gave Dancing with the Stars a valiant effort. SheKnows was with them in the studio as they prepared for what would be their last dance… 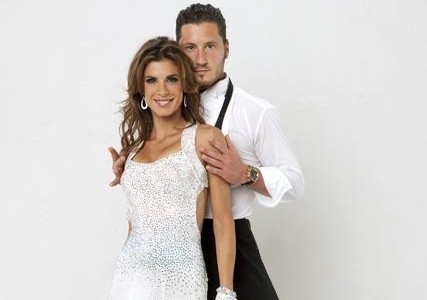 Though English, Italian, and Russian expressions could be heard flowing from their rehearsal, Elisabetta and Val told us “the language of dance” is the only one they worried about.

“I can’t speak Russian,” Elisabetta told us. “He doesn’t understand Italian. We speak the language of dance.”

That seemed to work well for the duo, who had already established quite the compatible working relationship.

“Everything is a great part of working with her,” Val told SheKnows. “She’s ambitious. She wants to do well and she listens to what I say. She has to hear this annoying Russian voice every single day for hours, and I know it can get a little overwhelming.”

And it’s true the training days were long. But, Elisabetta muscled through it.

Elisabetta tells us about her dancing diet>>

“We rehearse for six hours every day,” said Elisabetta. “I wake up at six in the morning and I have to walk my two dogs. Then I have to find the time to have breakfast, and then to take the car into the studios. We finish at 2:30 and then maybe go to some talk show or to a master interview for Dancing With The Stars, and then you can go home. It’s a long day.”

Elisabetta said that although she’s always been athletic, learning to dance was much harder than she expected.

“Ballroom dancing is hard for me,” said Elisabetta. “I’ve never done it before. I was very nervous.”

And criticism from spectators didn’t help. After the series premiere, the Kardashian sisters slammed Elisabetta and Val on Twitter.

But the confidant actress took the high road, refusing to engage in the antagonism.

“Things in the press are a little bit misunderstood,” she explained. “They love their brother, so they support him. It’s okay.”

Regardless of how people viewed her dancing skills, Elisabetta’s stunning appearance on the show was undeniable. Dressed in a maroon bedazzled top on the premiere, with flowers in her hair, the Italian beauty wowed viewers.

“I think the costumes are very pretty,” she told us. “We decided together with Val and the wardrobe designer, and we thought that color was right for me. I chose not to do a spray tan because I don’t really like it. It’s a long process because you cannot go there with a normal blow-dry.”

Though they weren’t the best dancing duo, we sure enjoyed watching Elisabetta and Val’s good looks and great chemistry.

And hey, maybe she’ll be back on T.V. sooner than you think!