Mike and Molly begin to plan their wedding on tonight’s Season 2 debut while star Melissa McCarthy begins life on the A-list. 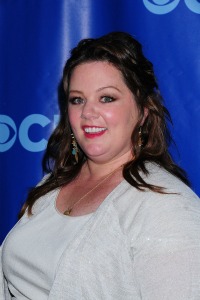 It’s a go for the Mike and Molly wedding, but now here comes the hard part — planning the big day. That’s where we’re at when Season 2 begins 9:30 p.m. EST on CBS tonight.

“If we’re going to have a shot at booking a nice place, we have to start looking now. … otherwise, we are going to end up getting married in your brother’s backyard and having a reception at the Sizzler,” says Molly (Melissa McCarthy)

“Sizzler? Is that a real option?” replies Mike (Billy Gardell). Mike, naturally, would rather go fishing than start planning.

Speaking about sizzling,  McCarthy certainly is thanks to her scene stealing turn in the movie Bridesmaids and her Emmy win earlier this month for the Molly role. McCarthy will also host Saturday Night Live this Saturday.

“To do SNL, is — I can’t quite even process it still…. I’m totally nervous and wildly excited,” McCarthy said on CBS’s Early Show Monday morning.

Also discussed was the “real” aspect of Mike and Molly, which features two plus-sized working class singles in Chicago.

“I get a lot of comments that they love, that, you know, that ‘I’m a teacher’ or ‘I have a sister that is a teacher. You look like a teacher. You dress like a teacher,'” McCarthy said. “I’ve always had a thing where I hate where somebody is talking about, ‘I can’t pay the rent.’ I’m like, ‘You have a $3,000 handbag.’ We try to just stay real to the characters. They do such a great job…writing this kind of great little story and luckily we get to stay true to it.”

On the topic of keeping it real, McCarthy designed the dress that she wore to the Emmys.

“It was a dark, dark purple. I went to school for clothing and textiles and thought this is what I was going to do,” McCarthy said. “Then I started working in costumes and literally said, ‘I don’t know if I can take the actors.’ And then I became the person I made fun of.”