Anne Hathaway showed off her curves in her sexy Catwoman outfit for Batman: The Dark Knight Rises.

Purr-fect form, indeed! Anne Hathaway has been open about her diet and exercise plan to fit into her “unforgiving” Catwoman costume for Batman: The Dark Knight Rises – and it looks like all the hard work has paid off! 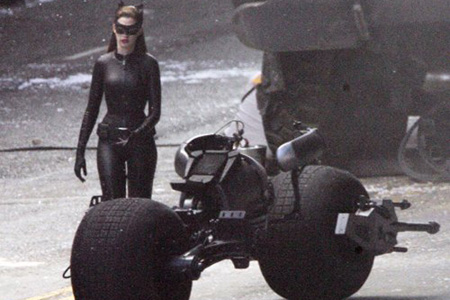 Taking over the role that Michelle Pfeiffer and Halle Berry have played in the past, Hathaway was spotted wearing head-to-toe black leather, with high-heeled boots with a rockin’ metallic heel, a low-riding belt and, of course, the famous cat eyes and ears. Her long, flowing hair and red lips give her that sexy, yet edgy look. 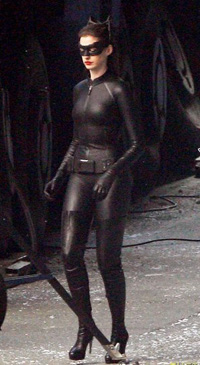 Hathaway said to prepare for her role, she has been “living on kale and dust” and is even a vegetarian right now.

“There’s a workout hump where you’re so weak that you hate everything, everything is so painful and you look like an idiot,” she says. “The gym where I work out, I was literally working out next to a pregnant Jessica Alba and she could do more push-ups than I could. I’ve now just started to do Bikram yoga.’

What can we expect for Hathaway’s Catwoman? Batman News is reporting that Catwoman is a stripper-turned-pickpocket.

“Catwoman is apparently one of the most well written characters we’ve seen in these movies so far and she could potentially steal the show the way Heath Ledger did last time,” the source says. “She does some cool stuff in the movie like jumping out of windows and stealing the Batpod. Her back story is that she has a history of abuse and works as a stripper and is also a pickpocket.”

Tell us: What do you think of Anne Hathaway’s Catwoman outfit?