Christina Milian is celebrating the big 3-0 by ignoring her babbling ex and jet-setting around the world with her daughter and girlfriends. 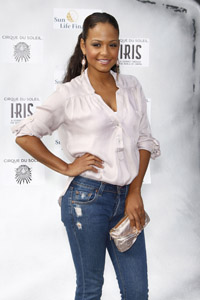 Happy 30th birthday, Christina Milian! The pint-sized singer fit a lot of living into 30 years — and she’s celebrating her new decade with a jet-setting trip. Milian — along with a few pals — hit up the trendy Brasserie Beaumarchais in Manhattan’s Meatpacking District last Thursday night.

“I want to be everywhere for my birthday,” the happy Milian told Star after dinner. “So it’s like New York, L.A., Vegas, Miami…this is my first one. I’m excited!”

Will her 19-month-old daughter Violet be a part of it?

“We’ll probably get dinner, something, celebrate together. I love doing stuff with her. So it’s kind of like every day is our birthday,” she said.

She deserves it, too: Milian went through a rocky divorce in late 2009 with producer and rapper The-Dream after giving birth to their daughter. Now, The-Dream is blasting his ex on his new web-only album, Terius Nash Est. 1977.

“Halfway decent for me but you dress up for your girlfriends? Listening to what they say got your [expletive] without a husband,” the once-suicidal rapper says on Used to Be.

“He’s funny. He is getting his chance now to speak up on his behalf and we are all entitled to say whatever we want,” Milian told The Huffington Post. “He and I had a talk and I just let him do what he wants to do. It’s easier that way.”

Instead, Milian is focusing on the new decade ahead of her.

“It feels great,” she told Star. “I feel way more honest, way more confident, and I’m just excited to see you know, they say with that age, with the thirties, comes wisdom and I feel that already.”