Johnny Depp has once again submerged himself in the work of Hunter S. Thompson. The Oscar-nominated actor headlines The Rum Diary, a film based on one of the author’s earliest novels and we’ve got a peek at its revealing new poster. 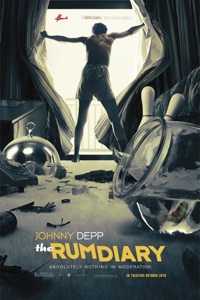 Johnny Depp is letting it all hang out in the latest poster for The Rum Diary. The actor appears scantily clad with boxers and nothing else as he stares at the Puerto Rican landscape.

The Rum Diary centers on unsatisfied journalist Paul Kemp as he makes the leap from New York to Puerto Rico after tiring of the U.S. and Eisenhower’s leadership. He travels to the tropical island where he encounters his fair share of colorful and troublesome characters.

In the official trailer for The Run Diary, Kemp seems to be a fish out of water. He yearns for change yet takes on more than he can handle.

Most of Thompson’s stories feature off the wall antics and unconventional protagonists and The Rum Diary is no different. Judging from the poster, more than a few underhanded things happen to Kemp after his big move.

He gets a job at the The San Juan Star where his editor Lotterman (Richard Jenkins) proves to be temperamental and uneasy. Kemp also becomes obsessed with a beautiful young woman named Chenault (Amber Heard), who’s the fiancee of a shady business man named Sanderson (Aaron Eckhart).

After leaving the concrete jungle of New York, Kemp stumbles into another dog-eat-dog world. Is Puerto Rico simply a rum-soaked paradise or a wolf in sheep’s clothing? You’ll have to watch the movie to find out.