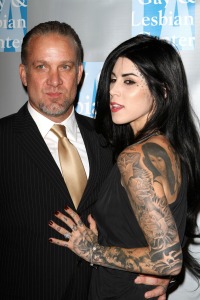 This time it’s final: Jesse James and Kat Von D have broken off their engagement again, and the pair says this time it’s for keeps.

Von D broke the news to fans on her Facebook page Saturday.

“I am not in a relationship,” the former star of LA Ink wrote. “And I apologize for all the ‘back and forth’ if it’s caused any confusion.”

“I am not in any way moving to Texas,” she continued. “And I am not leaving my shop here in Los Angeles, High Voltage Tattoo.”

The distance between Von D’s LA base and James’ home in Austin, where he followed ex-wife Sandra Bullock after their divorce, has long been thought to be a source of tension between the couple.

What went wrong this time? Kat spilled the beans to People, and in a roundabout kind of way made it sound like Jesse James did not treat her the way every woman deserves to be treated: like the only thing in the world that matters.

“It was clear to me that we were just on two different paths in life,” Von D told the mag. “My friend put it best when he said I could never be more deserving of total, noble love. And as a woman, I think it’s important to know your value and never lose sight of that.”

True that. But Kat Von D is not bitter.

“I wish Jesse nothing but the best in life and in love,” she said.

Jesse James has remained tightlipped on the split, and only just possibly briefly referred to it on Twitter Sunday, writing, “Up late late night. Then back up early this morning put a full day in the shop. Starting to feel like me again.”

Jesse James and Kat Von D began dating during the summer of 2010 and got engaged just a few months later. The couple had been planning a summer wedding before breaking up in July, only to reunite a short time later.