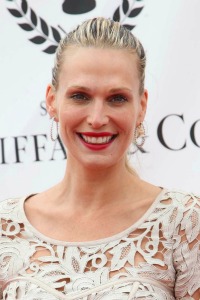 The happy couple, who dated for a year and a half before their engagement, exchanged their vows in an intimate ceremony with only close family and friends in attendance, according to People.

The bride wore a gown by Marchesa and jewels by Lorraine Schwartz, the same woman who designed Kim Kardashian’s humongous engagement ring.

Guests — including Sims’ Las Vegas co-star Josh Duhamel and wife Fergie — chowed down on red velvet wedding cake at a reception pulled together by wedding planner to the stars, Yifat Oren.

The 38-year-old Sims is set to host a Project Runway spinoff called Project Accessories and can be seen in the upcoming television movie Shredd and on the big screen in Chez Upshaw. She rose to fame as a Sports Illustrated swimsuit model and entered your home as the style icon of a new generation as host of MTV’s House of Style.

Click here to read about more celebrity weddings on SheKnows >>>

Stuber, who has produced such hits as The Break-Up starring Jennifer Aniston and Vince Vaughn, Welcome Home, Roscoe Jenkins, The Kingdom, You, Me and Dupree and Role Models, is currently working on Battleship, marking Rihanna’s acting debut.

Molly Sims and Scott Stuber announced their engagement in June. This is Sims’ first marriage; Stuber was previously married to actress Rachel Nichols for just seven months in 2008.