Long known as one of the most gorgeous women in television, Heather Locklear is redefining beauty at age 50 as she heads into a new and solid chapter in her life. 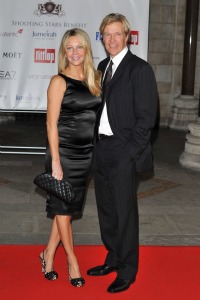 Heather Locklear‘s reputation as a television and film bombshell was only eclipsed by her reputation for being a rock star wife.

Now, at the age of 50, Locklear has finally settled into life on the quieter side of the fence, recently engaged to actor Jack Wagner, mother to a teenager, Ava, and clean and sober after a brief stay in rehab for prescription drugs.

If this is what 50 looks like bring it on!

After four years together, the two announced their engagement in August of 2011. They had been friends for years, having worked together on the primetime soap Melrose Place in the 1990s.

Both Locklear and Wagner have been married before. Wagner to actress Kristina Malandro, whom he met while working on the daytime soap, General Hospital. They have two sons.

Locklear was known for her penchant for rock and roll bad boys. She wed Motley Crue drummer Tommy Lee in 1986. They divorced in 1993. She later wed Bon Jovi guitarist Richie Sambora in 1994 and the two have a daughter, budding actress Ava.

According to Limelife.com, there were reports that the couple considered starring in a reality show about their relationship. The story revealed that Locklear was none too thrilled with the idea.

Locklear was most recently in the news for personal issues, including a 2008 arrest for driving under the influence (the charges were later dismissed after the court found her judgment was impared not by alcohol, but by the medications she took for anxiety and depression) and a hit and run in 2010 which was also dismissed due to insufficient evidence as to whom was driving Locklear’s car during the incident.