Jennifer Aniston was one of the many celebrities who were on hand for the Christie’s Artists for Haiti auction in New York City, and she and boyfriend Justin Theroux weren’t afraid to dig deep into their pockets for a good cause. 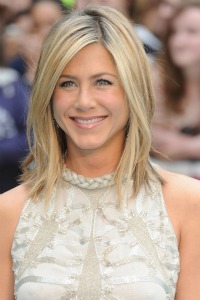 The duo bid on a painting titled, “Stranger #44”, a 6-foot abstract by the aritist Glenn Ligon.

Theroux did the actual bidding on the piece and it was reported by US Magazine that Aniston was clapping quite enthusiastically after he won. The painting was initially valued at $150K to $200K. The proceeds beyond that benefited the charity.

Many of today’s most noted artists such as Jeff Koons, Jasper Johns and Chuck Close created pieces designed specifically for the event. The highest-grossing piece of the evening? A work titled “My mother before she became my mother” by Marlene Dumas, that grossed $2M.

Zwimer and the Ben Stiller Foundation held the fundraiser to aid the struggling people of Haiti. The event grossed nearly $14M and was held at Almond restaurant, according to Reuters.

Aniston is no stranger to charity work. She has been involved with several high-profile charities over the past several years, including Stand Up To Cancer, AmeriCares, Bear Necessities Pediatric Cancer Foundation, Clothes off Our Back, EB Medical Research Foundation, Feeding America, Friends of El Faro, GLAAD, Habitat for Humanity, Lili Clare Foundation, Luke Neuhedel Foundation, OmniPeace, Project A.L.S, Rape, Abuse and Incest National Network, St. Jude’s Children’s Research Hospital and the US Campaign for Burma.

She and Theroux have reportedly been spending time together in New York City, and according to the NY Daily News, the two are living together in Aniston’s Los Angeles home.