Corey Feldman is being asked to pay child support. Think the former child star has a huge monthly sum to shell out to support his son? Think again. 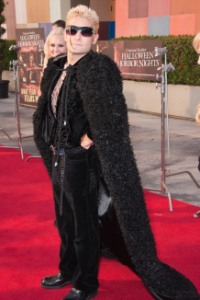 Corey Feldman’s ex wants child support for their son, but take note: This isn’t a case of the ex-wife of a Hollywood star looking to get rich. Susannah Feldman, mother of the actor’s 7-year-old son, has filed paperwork to receive a whopping $307 a month.

Corey Feldman, pictured here at the Universal Studios Hollywood Halloween Horror Nights Eyegore Awards last Friday, divorced the mother of his son in 2009 after seven years of marriage. Now Susannah is asking for his financial support of their child.

Susannah Feldman (known as Susie Sprague from her Playboy modeling days) has enlisted the help of county officials to obtain child support from her ex-husband. The local child support agency of the model and reality television veteran has filed legal documention in L.A. County Superior Court asking a judge to order payments to her be made mandatory.

The amount Corey Feldman owes to help take care of his child? A whopping $307 a month.

Why so little? According to further documentation the actor is only bringing in $1,387 per month. Total. No word on if Corey Feldman has any additional assets, but it appears even if that is the case they will not be taken into the child support amount consideration.

In addition to monthly payments of support, TMZ reports Susannah Feldman is requesting Corey to provide health insurance for their son, as well as pay half of any additional medical expenses.

Most recently the Stand By Me child star gave a shocking interview to Nightline in which he claimed pedophilia is a regular occurance in Hollywood and responsible for the death of friend and fellow actor Corey Haim.

When asked if he would put his own son into the entertainment industry Corey Feldman quickly replied, “No, absolutely not. I believe that everybody in this world should have the freedom of choice… child stars have nothing.”

Are you surprised to learn of Cory Feldman’s child support and income issues?