The Vampire Diaries is heading back to the roaring ’20s this week and we get to see a bit more of what Stefan was like in the old days.

Klaus and Stefan are heading back in time on this week’s episode of The Vampire Diaries, “The End of The Affair.” 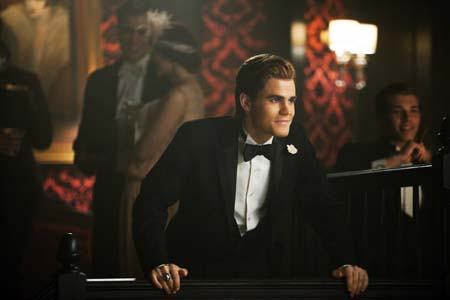 Last week on The Vampire Diaries, Klaus’ plan to build an army of hybrids didn’t go as planned thanks in part to Elena (Nina Dobrev) still being alive, but he didn’t quite put two-and-two together.

This week, Stefan (Paul Wesley) and Klaus travel back to the 1920s where we get to see a new part of Stefan and more of his past.

Check out a preview of “The End of The Affair…”

The CW officially describes “The End of The Affair” as the following: “Klaus (Joseph Morgan) and Stefan (Paul Wesley) arrive in Chicago, where Stefan is reunited with a vampire (guest star Claire Holt, “Pretty Little Liars”) who hasn’t really moved on from her interest in him decades earlier. In a flashback to Chicago in the 1920s, Stefan comes face-to-face with a shocking chapter from his wild past. After Damon (Ian Somerhalder) gets a tip on Stefan and Klaus’ whereabouts from an unexpected source, he and Elena (Nina Dobrev) follow their trail. Back in Mystic Falls, Tyler is concerned about Caroline and turns to Sheriff Forbes (guest star Marguerite MacIntyre) for help.”

read on for more news on the vampire diaries