While many of The Real Housewives of Beverly Hills spend their days schmoozing and brunching, the newest addition to the clique is one hardworking woman. SheKnows has the scoop from Dana Wilkey on how she balances the show, motherhood, and running three businesses. 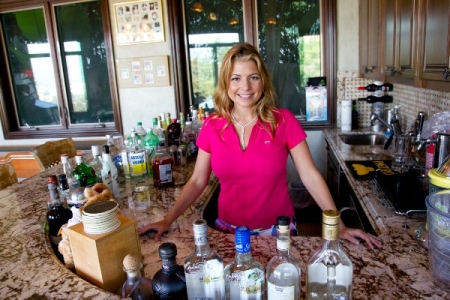 The newest housewife chats about the trauma on Real Housewives of Beverly Hills.

Dana Wilkey was not born with a silver spoon in her mouth.

“I left home when I was 15-years-old and built pretty much everything you see,” Dana told SheKnows during our visit to her 16,000 square foot home. “I’ve been through the wringer in my business. I’ve failed a million times. I’ve succeeded a million times.”

The new cast member of The Real Housewives of Beverly Hills runs three businesses. We didn’t get into the nitty gritty details of all of them, but you may remember her as the event planner who threw the $60,000 fourth birthday party for Taylor Armstrong’s daughter.

“If you’ve got some money and want to spend your money, spend it your way,” Dana said in response to criticism of the lavish event. “I’ve rented yachts that were the 3rd largest in the world, that ranged from $450,000 to $750,000.”

The party guru, who’s put on events for Bruce Willis and Fergie, thinks the fuss over the 4-year-old’s party was silly. “There were tea cups floating for crying out loud,” Dana laughed.

“Taylor has been my best friend for quite a few years, and I just love Taylor,” says Wilkey.

Sadly, Taylor recently suffered the devastating loss of her estranged husband Russell (who also appeared on the show).

“Taylor is doing as best as someone can be in her circumstances,” Dana told us. “I think she has really just been focusing on Kennedy and trying to be the best mom that she can be and try to rebuild her life.”

With the addition of Wilkey and fellow new housewife, Brandi Glanville, Bravo is trying to move past the incident and bring humor back to the show. Dana tells SheKnows that between bonding trips to Vegas and crazy catfights, it appears they’ve succeeded.

“I definitely call people on their BS,” says Dana. “If I feel like someone’s acting like white trash, I’ll do something about it or I’ll say it. I don’t hold back.”

At home though, Dana is anything but aggressive, playing the motherly role to her 2-year-old son John, and two adult (soon-to-be) stepchildren.

“I’m obsessed with teaching him things,” Dana revealed. “I taught him to read. He speaks Thai. I’m teaching him math.”

Quite the accomplishment for such a young child. But that’s just Dana. She’s constantly operating on all cylinders.

Tour Dana’s Beverly Hills home! She let our cameras into her home. >>

On top of filming the show, running her businesses, and teaching John just about everything, she’s also in the process of planning her own wedding.

We wouldn’t expect anything less.

Despite her busy schedule, Dana says she loves to hear from fans and anyone seeking advice on becoming a successful businesswoman. You can reach out to Dana on her Facebook or Twitter pages. She promised us she would respond!