The cast of Tim Burton’s Dark Shadows have made their online debut. Johnny Depp headlines the eerie supernatural drama that’s based on the former ABC soap of the same name. 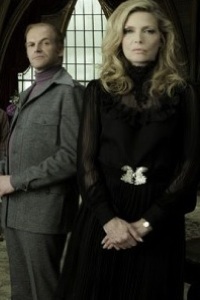 Once again, Johnny Depp has completely transformed himself for a Tim Burton film. The talented actor takes center stage in the director’s big screen adaptation of Dark Shadows. Warner Bros. has released an official cast portrait that features all the film’s major players including Helena Bonham Carter and Michelle Pfeiffer.

Tim Burton told Entertainment Weekly, “I remember seeing a group photograph of the cast of the original series. For me it captured the weird Dark Shadows vibe in a single image. I had a brief window of opportunity to have our cast present at the same time, the day before principle photography began. We decided to stage a similar picture instead of rehearsing, to see if we captured the Dark Shadows feeling.”

Dark Shadows was a soap opera that ran on the ABC network from 1966 – 1971. The series centered on the supernatural drama surrounding a vampire named Barnabas Collins (Jonathan Frid). It told stories of werewolves, witches, zombies, warlocks, parallel universes and more. After its cancellation, it went on to become a cult favorite and even spawned a shortlived NBC reboot in 1991 that featured Ben Cross, Joanna Going and a young Joseph Gordon-Levitt.

In Burton’s version, Depp will tackle the role of Collins, a character he claims to have worshipped as a child. The premise will center on the vampire’s return to the living after being in a coffin for 200 years.

Here’s the full cast photo of the new Dark Shadows cast below: 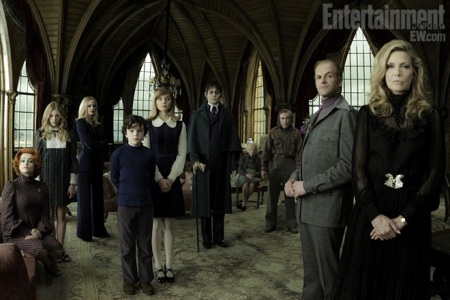 Dark Shadows is scheduled to hit theaters May 11.