George Clooney is usually tight-lipped about his personal life. So it should come as no surprise that he admits to hating social media in the new issue of Parade magazine. He also chats about turning the big 5-0 this year. 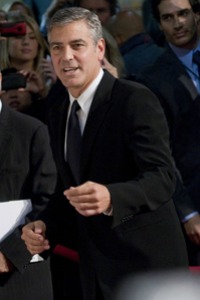 George Clooney isn’t one of those celebrities that tweets their every thought, meal or shoe purchase. In fact, Clooney hates social media. In the new issue of Parade magazine, Clooney said, ”I don’t tweet. I don’t go on Facebook. I think there’s too much information about all of us out there. I’m liking the idea of privacy more and more. There will be funny things, like I’ll read something I’ve said about a woman somewhere. And I haven’t spoken about my relationships in 15 years.”

The charming actor also opened up about turning 50, saying, ”I look at myself onscreen and go, ‘I don’t look like I did when I was 40 – I know that.’ The people I’ve respected most in the industry over the years – Paul Newman, for instance. I just loved the way he handled growing old onscreen. It’s understanding that you’re now basically a character actor. I find that as you get older, you start to simplify things in general. By the time you get a subscription to AARP, which I just got, you have some idea of who your friends are, at least. [Getting the AARP subscription] shocked me – are you kidding? [Laughs] I told them they should do ‘The Sexiest Man Still Alive.”’

Clooney has a brand new film coming out. In The Ides of March, he plays a presidential candidate, starring with Ryan Gosling. He talked about why it took so long for this film to get made. ”We were in preproduction on this film in 2007, before the Obama election. And then we realized that a good portion of the country was elated with what happened in that election, so we had to shelve the movie until people were cynical again. I didn’t think it would be quite this quick,” he laughed.