What do you get when Gary Busey swaps wives with notorious pastor Ted Haggard? We’re not sure, but hilarity is bound to ensue.

Related story Will Gary Busey face charges after hitting a woman with his car?

How’s this for an odd couple: Kooky actor Gary Busey and disgraced pastor Ted Haggard have reportedly signed on for an episode of Celebrity Wife Swap where the Celebrity Apprentice star and religious man switch wives. 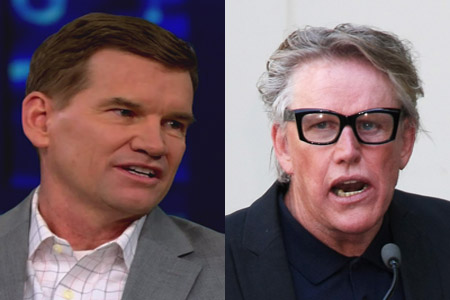 Taping was supposed to begin Thursday morning at the GLBT Pride Center in Colorado Springs, but the cast and crew never showed up.

Irwin said he received a phone call Wednesday night indicating the shoot was canceled, though he thought it was a hoax. “We already had a program planned for today…and they were a no-show. We have no idea why at all,” he added.

Busey’s longtime girlfriend, Steffanie Sampson, is slated to take the place of Haggard’s wife, Gayle. Gayle stayed with her husband after he was caught with a gay male prostitute. He admitted earlier this year that he’s bisexual. Gayle will then act as Busey’s wife for the show.

So, what’s the deal? Is the show filming in a different location or is it off for good?

“At this time we can neither confirm nor deny [the rumors],” Busey’s publicist, Michael Conley, told SheKnows.

Looks like we’ll just have to wait and see.

Will you tune in to see Ted Haggard and Gary Busey swap wives?

Read on for more Gary Busey