Is it already time for episode three of 90210? Time sure flies when you start college!

Are you enjoying the college life courtesy of 90210?

Two episodes in and already the gang of the CW‘s 90210 is taking full of advantage of being in college. 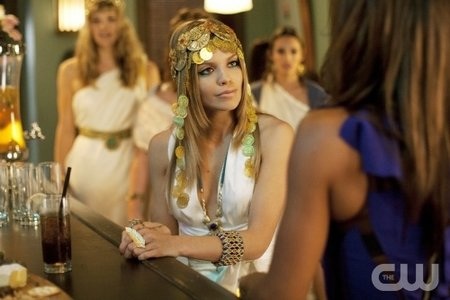 Last week, Naomi (AnnaLynne McCord) slithered around in her undies on the quad – don’t worry, it’s all for the good of a sorority. What could they possibly do this week?

The CW officially describes “Greek Tragedy” as the following: “After making an enemy in sorority president Holly (guest star Megalyn Echikunwoke), Naomi (AnnaLynne McCord) finds unusual allies who help her get revenge. Annie (Shenae Grimes), short on money for sorority dues, must figure out a quick way to come up with the cash. Liam (Matt Lanter) and Jane (guest star Kristina Apgar) get closer, while Adrianna (Jessica Lowndes) reveals a secret that causes Liam to look at her in a different light. Ivy (Gillian Zinser) becomes increasingly frustrated with her friends and lashes out at their lack of compassion, while Navid (Michael Steger) must deal with his uncle coming into town and trying to undermine Shirazi Studios.