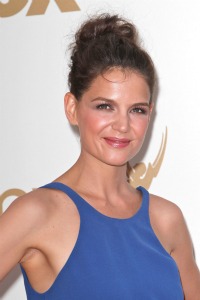 No, there’s no name calling here, it’s the character she will be portraying in a Halloween episode of the television show, How I Met Your Mother.

HIMYM show creators Craig Thomas and Carter Bays referenced the character during an interview about the show prior to the beginning of the season. They stated that the character would finally be revealed, but did not say who would be taking on the beloved title.

Missed the premiere episode of this season’s HIMYM? Read about it here>>

Holmes is a welcome addition to the cast, who has already hosted the likes of guest-stars such as Britney Spears, Sarah Chalke, Wayne Brady, Ben Vereen, Laura Prepon, Jennifer Morrison, John Lithgow and Enrique Iglesias to name a few.

Said Thomas to nymag.com, “Kate is a lovely and talented actress, which is why we’ve saved for her, perhaps the most classily named character in our show’s history. The role was six seasons in the making.”

Since leaving the small screen behind, (she last appeared on ABC’s Eli Stone in 2008), Holmes has been making movies and parenting daughter Suri with husband Tom Cruise.

She was recently featured in the mini-series The Kennedy’s and a remake of the classic film, Don’t Be Afraid of the Dark. Holmes will next be seen in the soon-to-be released Jack and Jill as the wife of Adam Sandler’s character, Jack.