Arnold Schwarzenegger is writing a memoir detailing his rise to fame. 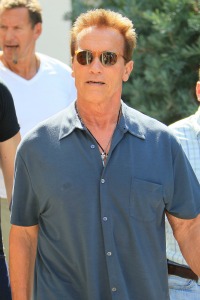 The book will focus on his childhood in Austria, his rise to fame as a bodybuilder and action star, and how he turned to politics with the help of his politically-connected wife, Maria Shriver.

Speaking of Shriver, while the memoir will touch on their breakup, don’t expect to read all the gory details.

“This book will not be a tell-all,” a source told People.

The memoir, tentatively titled Total Recall: My Unbelievably True Life Story, is something Schwarzenegger has been working on since prior to his separation from Shriver.

“He has been keeping notes and working on the book for over a year,” his spokesman Adam Mendelsohn said. “He didn’t want to write his autobiography while he was governor.”

Schwarzenegger and Shriver announced their separation shortly before it was revealed that he had a secret love child resulting from an affair with the couple’s longtime housekeeper.

Maria Shriver filed for divorce in July after the couple spent months working out a financial settlement. The couple has four children together.

“Nobody has a life story even close to his,” said Jonathan Knapp from Schwarzenegger’s publishing house Simon & Schuster. “Truly, Arnold is one of the most fascinating figures of our time.”

Tell us: Will you read Arnold Schwarzenegger’s memoir?

Son of Arnold Schwarzenegger and Maria Shriver released from hospital