Carla Bruni is tired of being pregnant and wants to drink and smoke again. 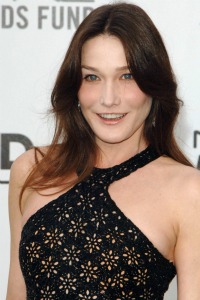 Almost every woman who has carried a baby to term has been there: There comes a point when you just want that baby out. Carla Bruni is no exception, but her reasoning has nothing to do with aches and pains — she just wants some wine and a cigarette.

Saying she is “totally fed up” with her pregnancy, Bruni told French newspaper Le Parisien, “Quite frankly, I can’t stand it any more. I spend most of my time either sitting down or lying down. I can’t drink or smoke any more. I’m in a hurry to get it over with.”

Bruni, the First Lady of France, already has a son Aurelien from a previous relationship.

“The baby will be viable at any time from October 1,” said the former model. “Aurelien arrived on time, which means this could be a long wait, but I really do want this child [out] so much.”

The wife of French President Nicolas Sarkozy has already told the press they should not hold their breath waiting for a photo opp with the new baby, calling the birth “a totally private event.”

Regardless, the timing of the birth could not be more perfect for the political powerhouse dad. “Politically speaking, the timing of this pregnancy is perfect. It is a ‘marketing-baby’ that will be born just before the last months of presidential campaigning really get going,” wrote France’s Marianne magazine.

Carla Bruni officially confirmed her pregnancy in July after several months of speculation in the press.