Antonio Banderas and Melanie Griffith have been married for 15 years, a lifetime in the world of Hollywood relationships. The Skin I Live In actor is sharing their secret for a successful marriage with AARP magazine. 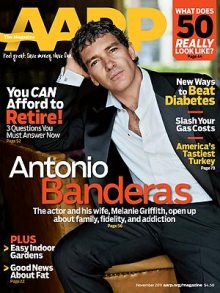 How do Antonio Banderas and Melanie Griffith make their marriage work? By taking their failures in stride.

The 51-year-old has opened up to AARP magazine in what has come to be known as his forthright way, unafraid to talk about wife Melanie’s addiction to painkillers, how rehab affected the family and the temptation of infidelity.

“The secret is that we had failures before,” Antonio Banderas shares when asked the secret to he and Melanie Griffith’s marriage. “And love at the beginning is a rush. It’s big, full of energy, beautiful. But it doesn’t last like that. Melanie and I talked about that a lot. Are we going to make the mistake of looking back for that thing all the time? Or are we going to look ahead and create universes that are different? We made the second choice.”

Referencing his wife’s struggle with painkiller addiction, for which she sought treatment in 2000 and visited rehab in 2009, Banderas continues:

“Even in crisis, we have been patient enough to detect that at the end of the tunnel was a light. We have had as many problems as anybody. We’ve never hidden it. We’ve been open about addictions, in the case of Melanie. She has overcome her problems beautifully. I didn’t know she was so strong. It makes me love her even more, because she has been an unbelievable lion fighting, and she got it. The last [relapse] was three years ago, and it just welded us.”

The pair extend the same no holds barred honesty to their kids, who have participated in Melanie’s treatment programs. “The whole family participated,” the actor says of the 2009 experience that “welded” them together. “We did all the therapies together — the kids, everybody. It was a very unique experience, not only for Melanie. It was very rewarding at the end.”

Antonio Banderas gives credit to Melanie for deciding not to hide her struggles from their children, a decision he fully supports. “The pretending is the worst, because kids are so smart,” he shares.”They can see through all of those things, and if you don’t talk openly about problems, it creates a very dark place. They carry that through the rest of their lives, to their marriages, to their kids.”

Be sure to visit AARP for more from Antonio Banderas!