NBC Thursdays return tonight with new episodes of The Office, Community and Parks and Recreation, not to mention the series premieres of Whitney and Prime Suspect. James Spader, Maria Bello, Whitney Cummings, Patricia Clarkson, Michael K. Williams and John Goodman are just a few of the big names getting on the laughs.

NBC Thursdays are back in business Sept. 23. James Spader‘s Robert California hits The Office. Michael K. Williams and John Goodman up the laughs on Community. Patricia Clarkson has locals running scared on Parks and Recreation. Whitney joins the lineup and, after the laughs, don’t forget to get serious with Maria Bello‘s new cop drama, Prime Suspect. 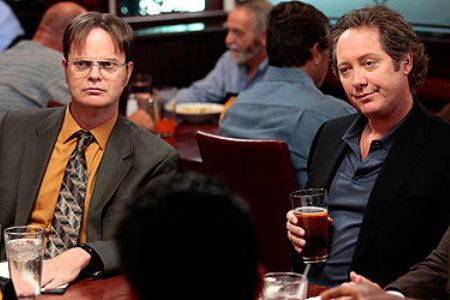 At 8pm, our fave Greendale study group learns whether their old pal Pierce (Chevy Chase) will come back to them after last spring’s paintball showdown, but that’s not the groups only new drama. When Jeff (Joel McHale) butts heads with their new biology teacher (Michael K. Williams, The Wire) and is kicked out of class, the crew faces a crisis over whether they will all stay together. Meanwhile, wacky Dean Pelton (Jim Rash) returns from “Dean Camp” a new man, only to find a new nemesis as well in Vice Dean Laybourne (John Goodman).

Parks and Recreation: Love and Politics

At 8:30, Leslie (Amy Poehler) finally gets her shot at running for office, but has to break-up with Ben (Adam Scott) if she wants to make that happen. Ann (Rashida Jones) is forced to dispense medical advice after making an unexpected diagnosis. Ron (Nick Offerman) prepares for the return of his first ex-wife, Tammy One (Patricia Clarkson) — even Tammy Two (Megan Mullally) is afraid of her!

When Whitney (Whitney Cummings, Chelsea Lately) and Alex (Chris D’Elia, Glory Daze) attend a friend’s wedding, Whitney worries her relationship is going stale. Determined not to let that happen, Whitney consults her girls — opinionated BFF Lily (Zoe Lister-Jones, The Other Guys) and Roxanne (Rhea Seehorn, The Starter Wife). Snapping into action she tries to seduce Alex in a sexy costume, but someone winds up in the emergency room.

At 9:30, two-time Emmy-winner James Spader checks into The Office as the company’s mysterious new CEO, Robert California, while Michael Scott’s final replacement for regional manager will be revealed. The new boss will face an Office crisis when his — or her! — staff accidentally discovers a list of their names in California’s notebook.

At 10, things take a serious turn when NBC introduces Jane (Bello), an outsider who can be willful, rude and downright reckless. In the pilot episode, Jane gets a rough start with her new New York homicide squad when she questions her colleagues’ work. After complaining to her lieutenant (Aidan Quinn) about not getting cases, Jane manages to find a unique angle to help solve a crime. Meanwhile, Jane goes to her father (Peter Gerety) for advice.