SheKnows: Kevin Williamson is a genius when it comes to building on a genre rather than making it completely unrecognizable. How has it been working on a Kevin Williamson project of this nature?

Shelley Hennig: I have total trust in him, first of all, because of The Vampire Diaries and everything else he’s done. What I love most about Kevin’s writing, and his shows, is the relationships are real. Yes, we’re doing a supernatural show but the relationships are so real and everyone can relate to each relationship in the show and that’s, in my opinion, what makes his shows so great. 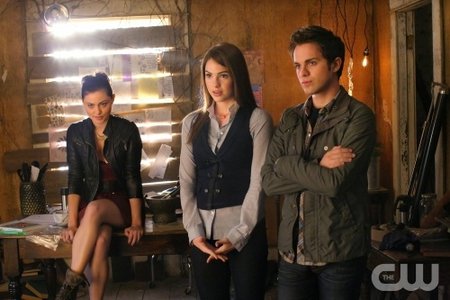 SheKnows: You guys shoot in Vancouver. Are you enjoying the location?

Shelley Hennig: I’m loving it! I was really nervous. First of all, I’m from the South — New Orleans. I lived a couple years in New York and froze my bum off (laughs). Now, I’ve been in LA for four years, so I’ve been really warm. So, we shot the pilot here in Vancouver and actually the rain scene, I’ll point out, I find very humorous on our end…

Shelley Hennig: The rain scene where Faye (Phoebe Tonkin) makes it rain — it was about 20 degrees and we were doing that scene for a good 10 hours in the middle of the night with the rain tower. The water was not warm. So, there’s this shot where all of a sudden Phoebe convulses and her body just jumps and I’m frozen over. Re-watching that is so crazy because I’ve never been so cold in my life and the minute that water hits the top of your head — it was like someone was taking a scalpel to the top of my head. We all went home and felt so accomplished. I kept saying I felt like I completed an episode of Survivor.

TSC: Shelley chats days of our lives and flying

SheKnows: Obviously, we know you from Days [Days of Our Lives] and when we saw the pilot you were almost unrecognizable — it was kind of cool to see you in a different way.

Shelley Hennig: I thought it was cool too because people really do know me as Stephanie from Days of Our Lives. That was my first job, so it was really important to me that I did look completely different, but it’s also important that the look keeps changing — I’ll be recognizable again (laughs).

SheKnows: We had to keep doing double takes of the pictures.

Shelley Hennig: I can play so many different nationalities and people. I kind of have fun getting ready for auditions and playing different characters.

SheKnows: If your character could cross over to The Vampire Diaries, who would you want to have scenes with and who do you think Diana would relate to the most?

Shelley Hennig: Oh, that’s a good one! My first instinct is Elena — a good girl just wanting to be normal, because she’s put in a situation where’s she’s fallen in love with a vampire and it’s the same with Diana. Diana never asked to be a witch, she just happened to find a book of shadows and boom, her entire life has changed — but it is her life and she embraces it and Elena does the same thing.

SheKnows: If you could have a witch’s power for one day, what would it be and what would you do with it?

Shelley Hennig: Well, right now I’m having trouble traveling to all the places I want to go to and I cannot stand airports and it depresses me. So I would want to fly. I don’t care if was on a broom or a carpet, it doesn’t matter to me — I just want to get to places faster.