The Secret Circle debuted to strong numbers on the CW Sept. 15 and what we learned during the premiere is only the beginning. SheKnows got the dish straight from Shelley Hennig and you won’t believe what’s in store for the coven of witches or her character Diana. 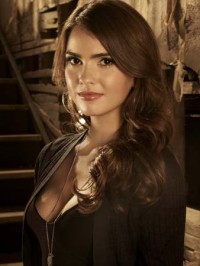 Witches, shooting in Vancouver and her Vampire Diaries crossover dream scene — The Secret Circle’s Shelley Hennig dished it all to SheKnows!

The Secret Circle features teen Cassie’s (Britt Robertson) struggle as she learns she’s not only a witch, but the key to a fight between good and evil.

Shelley Hennig stars as coven leader Diana on The Secret Circle — a witch that is tasked at keeping order but she may have a few secrets of her own.

After watching the premiere, we had a few lingering questions for Shelley: Will Diana continue to take Cassie under her wing? Can Diana keep her own powers in check? And what would be the first thing Shelley would do if she was a witch? We have all those answers and more.

Shelley recently took a moment from witchcraft and supernatural doings to chat with SheKnows and we were spellbound!

TSC: Where do the witches go from here?

SheKnows: Fans were introduced to the Circle/coven and your character (Diana) pretty fast in the premiere. What can we expect in the upcoming episodes?

Shelley Hennig: It definitely gets darker and sexier. You will always be wanting to know what happens in the next week. We as the actors feel the same way — we finish an episode and can’t wait to get the next script to figure out what’s going to happen next. There’s also some love triangles — there’s the Adam (Thomas Dekker), Cassie and Diana love triangle. It gets really interesting and really complicated, because Diana and Cassie become really good friends, so it’s a little awkward.

SheKnows: We haven’t seen much of Diana’s relationship with Adam (Thomas Dekker) yet…

Shelley Hennig: Diana is really intuitive and she fears something is happening between Adam and Cassie –something that they can’t control.

SheKnows: Diana seems to be the voice of reason and takes a liking to Cassie, but does she really care about Cassie or does she have a bigger motive in mind where the Circle is concerned?

Shelley Hennig: Diana really does like Cassie. I do believe that there is a bigger motive as to why Diana, or anybody, wants the Circle being bound. I think that’s what’s interesting about this show. You don’t necessarily know the real reason why each person in the Circle actually wants to bind it — or doesn’t want to bind it. I think there are some secrets for sure.

SheKnows: Are there going to be moments coming up where we see Diana lose control?

Shelley Hennig: That will be interesting. Diana will definitely change. I think she’s on a path right now for sure.