Modern Family’s Mitchell and Cam’s adopted daughter Lily will no longer be played by twins Jaden and Ella Hiller, but by a new adorable 4-year-old actress named Aubrey Anderson-Emmons. 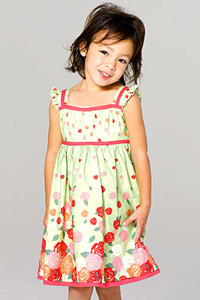 The Modern Family cast has a new daughter, as twins Jaden and Ella Hiller are out after playing Mitchell (Jesse Tyler Ferguson) and Cam’s(Eric Stonestreet)  adopted daughter for two season.

Why the cast change? A source reports that the twins “didn’t enjoy acting” and “became agitated and unhappy” during scenes. This is somewhat surprising, as they always looked so happy and content on-air.

Their mother, Michelle Hiller, told People that they are done with Hollywood (for now!) and just want to be kids.

“Ella and Jaden are enjoying new toddler adventures in swimming, dance, gymnastics, and rock climbing,” she says. “They are happy with the freedom of being 3 [years old]!”

Santa Monica native Aubrey Anderson-Emmons is the 4-year-old that will play the new Lil — and she has lines this year!

The pint-size actress is also reportedly adjusting on set, thanks to a little help from actor Nolan Gould, who plays Luke Dunphy.