Roseanne Barr reveals her presidential plans — and her high hopes — to The Wendy Williams Show. You have to see what she’s planning to do when she’s in charge.

A ton of people have thrown their hats in for the 2012 presidential race, including Michele Bachmann, Ron Paul, Rick Perry… and Roseanne Barr? 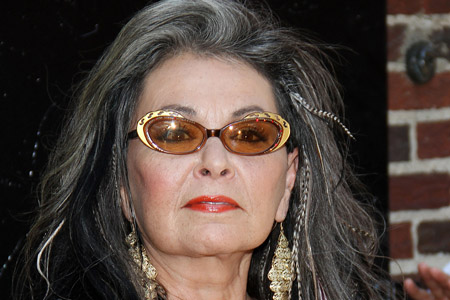 Yep, the comedian is serious about running for president in 2012, according to an interview she did with Wendy Williams.

“It’s absolutely true,” Barr said when Williams asked if she was running. Her platform? “Legalizing marijuana is first… and hemp. Marijuana is a good medicine and a lot of people know that.”

The audience –full of women — cheered for the veteran sitcom star when she made the announcement.

“I use medical marijuana for my glaucoma and I thank God that I have it,” she continued. “I also will forgive all student loans.”

Naturally, that made the audience really happy. Who doesn’t want their school debt wiped out?

Barr also told Williams about her conditions for competing on Dancing With the Stars. “Well, I told them I would come on if they’ll pay for my hip replacement first,” she joked.

Back to Barr for president 2012: the announcement might have been a surprise to the audience, but Twitter followers of Rosie know that she’s pretty outspoken about her views on everything from the Casey Anthony trial to the government.

“I will show up for wall street again–praying for bankers (young ones) to walk away from babylong (sic) and join the protest,” Barr tweeted, referring to the Occupy Wall Street protest that has been going on for several days.

And why not? Barr has the time now: Roseanne’s Nuts has officially been canceled by Lifetime.

“Glad you guys loved #roseannesnuts-@Lifetimetv decided not to renew it,” she wrote Wednesday afternoon. Will we see her on television again soon? Maybe, if her Twitter fans have anything to say about it.

Maybe she can join The Real Housewives of New York? They need some new, opinionated blood on the show.

Would you vote for Roseanne Barr for president of the United States?