Paris Hilton is officially off of probation and the heiress can put the Las Vegas cocaine case firmly behind her. 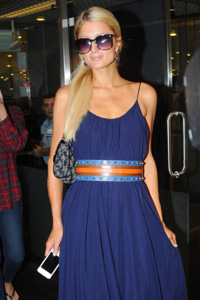 Paris Hilton is off probation after being charged with cocaine possession last year in Las Vegas with her ex-boyfriend, Cy Waits. Hilton, 30, was sentenced to one year of probation as well as a $2000 fine and 200 hours of community service.

Yesterday, Justice of the Peace Joe Bonaventure formally closed Hilton’s case after determining that she not only met her probation requirements, she exceeded them. Hilton did 228 hours of community service, instead of the required 200. She reportedly did her community service by working with a Las Vegas animal foundation and painting over graffiti in LA.

“She has stayed out of trouble, so the state has no problem,” Deputy District Attorney Priyanka Sedlock said during the hearing.

All that community service didn’t come without a little complaining, as she was caught on-camera on her short-lived Oxygen reality show, The World According to Paris, talking about the required work.

“Am I gonna be working with, like, convicts and, like, prisoner people? Because of a little incident in Las Vegas last year, I have to do 200 hours of community service and it really sucks (expletive),” she said on air.