Rapper Curtis ”50 Cent” Jackson is about to hit the big screen again. He’ll be playing a 1980’s era pimp in the new film, The Frozen Ground. We’ll give you all the details. 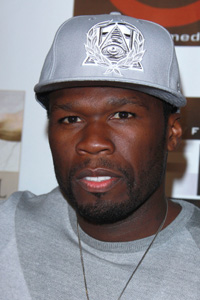 The Frozen Ground is scheduled to begin filming in Anchorage, Alaska on October 17th and is based on the true story of serial killer Robert Hanson. Back in the ’70s and ’80s, Hanson — the so-called ”Butcher Baker” — confessed to killing 17 women, most of them strippers or prostitutes.

According to the Anchorage Daily News, producers say that Jackson will spend about two weeks filming in Alaska. Randall Emmett, a production partner on the film said, ”The director thought that there was a great role for him and I gave him the script.” He claimed that it was a ”substantial role.”

”He’s basically moved a lot of tour dates and a bunch of stuff that he has on his calendar to be committed and up in Alaska,” Emmett said.

In the film, John Cusack plays respected Alaskan family man Robert Hanson, a man who abducted women, flew them in to the wilderness in Alaska and hunted and killed them. Nicolas Cage plays an Alaskan State Trooper who finds an escaped girl (Vanessa Hudgens) on the street. Together they work to bring Hansen in and serve justice.

If you recall, last year Jackson dropped a whole 54 lbs for his starring role in the Mario Van Peebles film, Things Fall Apart. He played a football player battling cancer and used a combination of a liquid diet and three hour a day treadmill stints to accomplish the task. Now that is what we call dedication to a role. So, are you excited to see 50 Cent back up on the big screen? Let us know below.

How 50 Cent plans to save Africa with an energy drink