A Charlie’s Angels crew member has been fired after he was accused of touching Minka Kelly inappropriately. 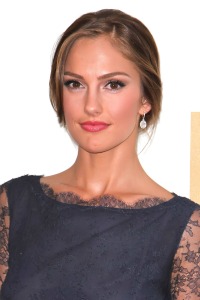 Don’t touch Minka Kelly‘s butt — that’s a lesson someone just learned the hard way. A crew member on the remake of the hit series Charlie’s Angels has been fired after he got a little too frisky with the talent.

Sources close to the production say the unnamed man slapped Minka Kelly across the butt — a move that greatly displeased the actress.

What happened next is in dispute, with some sources saying she slapped him back and some insisting she simply said, “Please don’t ever disrespect me or any other woman like that again.”

“It seems like it was meant to be a joke, but clearly it was inappropriate. Minka was shocked and absolutely irate,” a source told Star magazine. “She was still fuming about it hours later.”

While insiders say Minka didn’t want him to be canned because she felt badly that he had moved his whole family to town when he got the job, there were witnesses — and ABC has a zero-tolerance policy when it comes to sexual harassment.

“The whole set was buzzing about the incident,” the source said. “It was quite a scandal. One day he was there, and the next he was gone.”

SheKnows is awaiting comment from Kelly’s rep. When contacted by Star, the man in question — who has chosen to remain anonymous — called the whole thing “a misunderstanding.”