Comic Amy Schumer is making a name for herself, thanks to a joke she made about Jackass star Ryan Dunn’s death during Charlie Sheen’s roast.

One person managed to take The Roast of Charlie Sheen to another cringe-worthy level — and it wasn’t Sheen! Comedian Amy Schumer managed to upset Jackass fans with her routine at the roast, thanks to one seriously off-color joke about deceased star Ryan Dunn. 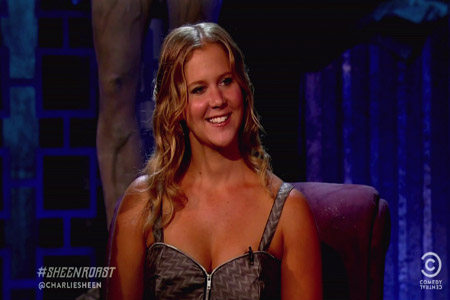 “I’m sorry for the loss of your friend Ryan Dunn,” Schumer told Jackass star Steve-O when it was her turn to roast.

“I know you were thinking, ‘It could have been me,’ and I know we were all thinking ‘Why wasn’t it?'” she added. The camera then panned to Steve-O — real name Steve Glover — who reacted with a blank, confused stare.

Dunn, 34, died in fiery car crash in June after drinking with friends in a Pennsylvania bar. Friends blasted Dunn’s critics after the crash, including a back-and-forth Twitter fight between Roger Ebert and Bam Margera.

The audience didn’t react positively to Schumer’s joke — some booed while a smug Schumer continued with her set. Fans feel like it’s too soon to joke about Dunn’s untimely death — after all, it was only three months ago.

“Why does everyone hate on Ryan Dunn for drunk driving? He was human, he made a mistake, (we all do) and he died young for it. R.I.P.” one fan tweeted after the roast.

“Wow too soon for Ryan Dunn jokes.. and they really shouldn’t be directed at close personal friends of his,” another fan tweeted.

Still, some others feel like nothing is off-limits at a roast, not even death.

“Anyone who feels like Amy Schumer crossed the line w a Ryan Dunn joke at the #sheenroast, its ur fault for thinking there’s a line at a roast.”

Weigh in: Amy Schumer’s joke: funny or not?