Notorious prankster Brad Pitt has found a worthy adversary in Moneyball co-star Jonah Hill. It was an all-out prank war on the set of their film, set to open Friday, and according to both Pitt and Hill, it got pretty intense.

Brad Pitt and Jonah Hill staged an all-out prank war on the set of their latest film, Moneyball, and no one and nothing was safe from their wrath. 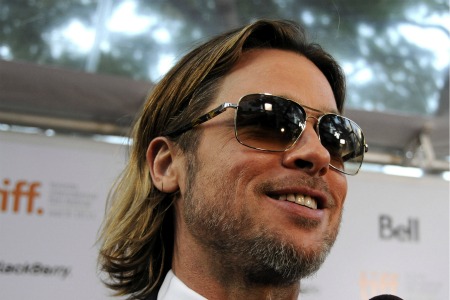 The two found that their love for making movies was only eclipsed by their love for the ultimate prank. Hill confessed on The Late Show with David Letterman that, “We had these golf carts. We would drive these golf carts all around and smash into each other and it was really fun and stupid. I got my own golf cart just for me. He would mess with it.”

He then revealed, “I would walk outside and there would be no wheels on it. It would be on cinder blocks. Then one day I would come out and it would be completely upside down.”

So Hill did what any straight up guy who’s been attacked would do, he fought back!

Hill revealed, “I thought I’d vandalize his car a little bit for the ride home. So I wrote on his car, ‘Brad Pitt’ with an arrow pointing up to the windows, so while he was driving home people would notice it was him.”

Pitt has a notorious reputation for being a prankster. At the Toronto Film Festival, where the two were discussing the film, instead of talking about working together, they made fart jokes in front of the media. Hill would say, “Brad’s chair is squeaking.” Pitt’s reply, “It’s not my chair.” Laughter ensued.

After all was said and done, the two stars agreed that this is one of the best tales they’ve ever worked on, with Pitt stating at the film festival, “At the end of the day, it’s a story about our values.” Hill chimed in, “I was a very unconventional person to be in Moneyball. I can’t stop smiling.”