We’re losing our (musical) religion: R.E.M. is breaking up after thirty years of music-making.

R.E.M. taught us that Everybody Hurts… sometimes. Now, they’re the ones causing the hurt: They’re breaking up after three decades of music-making. 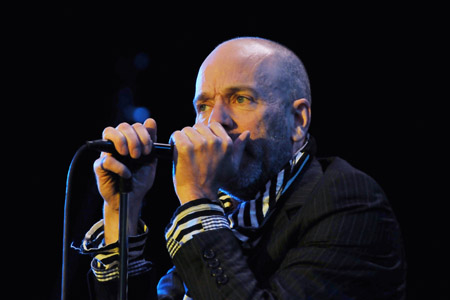 The Athens, Georgia-born band released a statement on their website about the break-up, saying it was time to end.

“To our Fans and Friends: As R.E.M., and as lifelong friends and co-conspirators, we have decided to call it a day as a band. We walk away with a great sense of gratitude, of finality, and of astonishment at all we have accomplished. To anyone who ever felt touched by our music, our deepest thanks for listening,” the band wrote on their website Wednesday morning.

The guys also added their personal thoughts to the end of their musical collaboration.

“A wise man once said–‘the skill in attending a party is knowing when it’s time to leave.’ We built something extraordinary together. We did this thing. And now we’re going to walk away from it,” lead singer Michael Stipe wrote in his statement.

Get all the latest music news from SheKnows Entertainment>>

“I hope our fans realize this wasn’t an easy decision; but all things must end, and we wanted to do it right, to do it our way. We have to thank all the people who helped us be R.E.M. for these 31 years; our deepest gratitude to those who allowed us to do this. It’s been amazing,” he added.

The band released their 15th – and final – album this year. Collapse Into Now was recorded in cities around the world, including Nashville and Berlin, and debuted at number five on the Billboard 200.

The band’s end wasn’t because of a quarrel.

“We have always been a band in the truest sense of the word. Brothers who truly love, and respect, each other. We feel kind of like pioneers in this — there’s no disharmony here, no falling-outs, no lawyers squaring-off,” bassist Mike Mills wrote in his statement.

“We’ve made this decision together, amicably and with each other’s best interests at heart. The time just feels right.”

How do you feel about the end of R.E.M. as we know it? Do you feel fine, or sad?