Sarah Michelle Gellar is opening up about her struggles with body dysmorphic disorder for the first time, and sharing a message to all the women out there — stop comparing yourself to others! 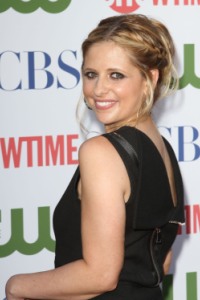 Sarah Michelle Gellar has a hard time looking at herself in the mirror without seeing flaws. “I totally have body dysmorphic disorder, I think most women do” the actress reveals in the lates issue of Health magazine.

An anecdote from Sarah Michelle Gellar‘s work life illustrates her point. She shares, “A makeup artist friend once said, ‘I don’t think I’ve ever seen you look in a mirror.’ I’m surrounded by them all the time — you sit in hair and makeup — so I guess I just have this mechanism where I tune it out. So every once in a while, I’ll look and I’ll be like, ‘Wait, that’s what I look like?’ I just have to remember that I’m human, and I’m a mom. Being a parent changes the vanity at least a little bit. It has to. Your priorities are different.”

Body dysmorphic disorder, sometimes known as BDD, is a psychological disorder “in which the affected person is excessively concerned about and preoccupied by a perceived defect in his or her physical features.”

For Sarah Michelle Gellar, taking care of herself means knowing better than to compare herself to a photo of a fellow actress. “I would never do that to myself, especially because I’m aware of the airbrushing and trainers and food programs,” she says. “You have to use yourself as inspiration.”

The 34-year-old, who is mother to 2-year-old daughter Charlotte with husband Freddie Prinze Jr., continues, “I think if I was going to put something up, I would put a picture of myself where I was proud of my body. But I would rather not look at a picture of myself on my fridge.”

When asked what picture of herself that would be, the Ringer actress thinks back to her pre-pregnancy days saying, “I was in really, really good shape. I think when I was doing Buffy I was a little bit thin, actually, because even though I was working out constantly, it was just the time and the age. But I was happy being pregnant, too. I’m not as critical as I used to be about my body.”

Be sure to check out Health magazine’s Oct. issue for more with Sarah Michelle Gellar!