Lady Gaga’s little sister tells Teen Vogue she has never felt like she was in the star’s shadow. 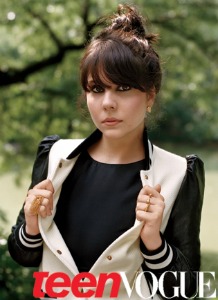 Sibling rivalry? Not in the Germanotta family. The little sister of Lady Gaga says she and the star are super close, and Gaga is her biggest fan.

Talking to Teen Vogue, Natali Germanotta says one of the coolest surprises Lady Gaga ever did for her was the day she turned one of Natali’s school projects into a giant shoe piano for an appearance on the Oprah Winfrey Show.

“I was at my parents’ house sobbing, like, ‘Oh my God,'” the 19-year-old student at the prestigious Parsons The New School for Design told the magazine.

What is Natali’s ethos? Is it as wild as Lady Gaga’s? Not quite. Describing her daily black-on-black personal uniform as “witchypoo” she says her sister’s wardrobe changes would be too exhausting for her because “she changes 50 times a day.”

One of those wardrobe changes was a fabulous outfit involving a beekeeper’s hat that Lady Gaga wore to her sister’s high school graduation.

“The teachers were like, ‘Oh my God, I can’t handle this family,'” she says. “She asked me, ‘Should I dress really conservative and not look like myself, or should I do it over-the-top and freak everybody out?’ And I was like, ‘The latter, definitely the latter.'”

Although they are both colorful characters — and Natali is studying fashion, after all — the little sister is definitely the more conservative of the two, a fact which means something to their dad.

“Whenever I wear something crazy and my dad gives me a hard time, I say, ‘Well, at least I’m not walking out on the street with red pasties,’ and he’ll be like, ‘Good point,'” Natali said.

Read the rest of the story on TeenVogue.com.

Lady Gaga is too hot for China

Lady Gaga on the day she dropped drugs