After receiving one of the highest scores of the evening, Dancing with the Stars cast member Chynna Phillips revealed to reporters that during her dance with partner Tony Dovolani, she felt angels around her.

After actress and singer Chynna Phillips hung up her dancing shoes for her first night’s performance on Dancing with the Stars with partner Tony Dovolani, she spoke to reporters post-show. She revealed that she wasn’t alone with Dovolani on the dance floor, that there were many other people with her. 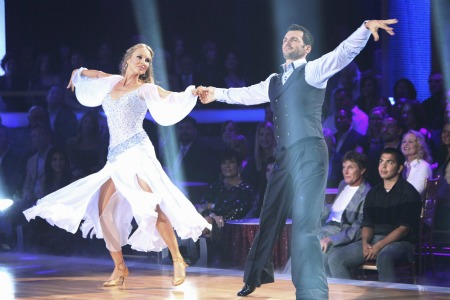 The singer claimed to the press that she, “literally felt the angels of the orphanage that I work with.” Phillips supports an orphanage called Los Angelitos in Tijuana, Mexico. She stated, upon starting with the show, that she wanted to raise awareness of the 40,000 orphans alone on the streets of Tijuana.

Phillips and Dovolani received the second-highest scores of the evening, tying with J.R. Martinez.

And the first star to be eliminated was? Read here for more>>

While she admits she enjoys dancing, she revealed that she has never watched the show prior to her appearance and had no idea that a star’s first dance on the premiere show normally does not have a solo to start.

Stated Phillips to the press after the show, “You know what’s funny? When you don’t know what to expect and you don’t know anything different…I’ve never watched Dancing with the Stars before, so I didn’t know that nobody gets solos the first time. That was good, at least I didn’t know so it didn’t make me scared. I didn’t know if the cameras were on me for the solo. I had no idea. Tony just told me to do it and I did it.”

Dancing partner Dovolani explained later, “When I was watching her do the solo, I could tell something more than just what she’s doing. So I asked her, ‘something came over you. You weren’t normal,’ meaning you weren’t Chynna that thinks, you were Chynna that embodied this special energy. And she said there were some angels around her.”