Rocker Pete Wentz has searched high and low for love since his separation from Ashlee Simpson and breakup with actress Michelle Trachtenberg. He was recently spotted hand in hand with a new female in Hollywood. 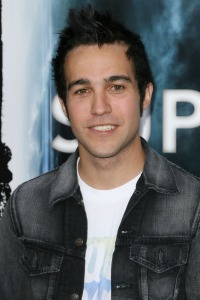 Former Fall Out Boy bassist Pete Wentz was spotted on Monday evening with his arm draped around an unnamed female companion at the hot Hollywood restaurant, Katsuya.

Wentz revealed his latest lady love just a short time after ex-wife Ashlee Simpson went public with her latest flame, actor Vincent Piazza. Ashlee and Pete were married for two and a half years and have one son, Bronx.

According to onlookers, Wentz ordered the most expensive bottle of sake at Katsuya and shared creamy rock shrimp and yellowtail with jalapeno with his mystery lady.

Wentz and Simpson filed for divorce in early 2011 and share custody of their son Bronx. When news of their divorce broke, People Magazine stated in a story that there was no third party involved in the split, that the two had simply grown apart. The story also revealed a source that explained, “It’s all about Bronx for them. They’re fantastic parents. Pete says she’s a great mom and she says he’s a great father. It’s about Bronx’s care and well-being and happiness for them.”

Since his separation from Simpson, Wentz has dated actress Michelle Trachtenberg, with whom he had a relationship prior to meeting and marrying Simpson in 2008. The two rekindled their relationship this past summer, going on coffee runs and spending quality time together.

Simpson has been spending plenty of time with new beau Piazza. The two went public with their relationship on the red carpet at the Emmy Awards and according to US Magazine, Simpson has already met her new love’s parents. The couple were spotted dining together at the HBO after-party held at L.A.’s Pacific Design Center.