Steve Martin has some advice for next year’s Academy Awards host Eddie Murphy. 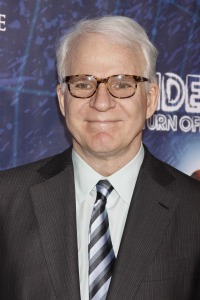 As a former Oscars host himself, Steve Martin knows a thing or two about putting on a good show. It’s no surprise then that he has some tongue-in-cheek advice for the host of next year’s Academy Awards, fellow Saturday Night Live alum Eddie Murphy.

Martin, who hosted the 2010 awards with Alec Baldwin, posted an open letter to Murphy on his website offering the following funny words of wisdom:

“Whatever you do, don’t have a co-host. They’re a big pain and they just end up breaking your SNL hosting record.

People always say it’s a disgrace that neither you nor I have ever won an Oscar, but they’re just being correct.

The losers can feel very sad, so when you’re backstage with them, pat their backs, then shake your head sadly. It’s a blast!

Fortunately, only you and I can get away with smuggling out an Oscar in our pants.

Remember to relax and have a good time while 12,000 live bloggers rip you to shreds.

The accountants that certify the voting? Same chad counters from Florida.

If you feel tired midway through, give Neil Patrick Harris a Red Bull and throw some sheet music at him.

Eddie, since you and I are old friends, and I sincerely thought you deserved an Oscar nomination for Bowfinger, the movie we did together that stands alone in comedy history, from which we got no credit or acknowledgement except large paychecks and drivers and any type of food we wanted delivered to us every day in our really nice trailers, I wish you all the best on your Oscar hosting gig.”

Can you feel the love?