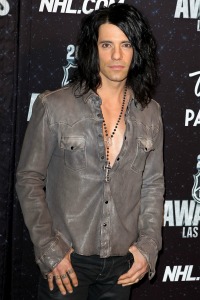 The Las Vegas-based illusionist got engaged to his girlfriend Sandra Gonzales in Cabo San Lucas back on Sept. 7.

Quite the proposal it was, too: Angel presented Gonzales with a five carat diamond and arranged a huge fireworks show in front of their private 11,000 square foot vacation villa triggered by his beloved’s acceptance.

“Sandra & I thank u 4 the beautiful thoughts, wishes & kind words. We have never been happier – thanx 2 all of u 4 making this time so special 4 us,” he tweeted.

The pair met four years ago on the set of his A&E show Mindfreak. In the meantime, Angel dated Holly Madison, Cameron Diaz and Pamela Anderson.

Angel was Holly Madison’s first high-profile relationship after her breakup with Hugh Hefner. The couple split in Feb. 2009, with a pal telling People, “It was a conflict of schedules. She felt she couldn’t devote 100 percent of her time in Vegas and his career at the expense of her career and her goals.”

Holly Madison has so far remained silent on her ex’s happy news, but she is usually rather gracious under such circumstances — except when she called out Hugh Hefner’s former fiancée Crystal Harris for having ulterior motives. Check back here for updates on this story.