Who was the first to go on season 13 of Dancing with the Stars? We’ll give you a hint — he stands for Peace.

Dancing with the Stars — the first elimination of the season.

Season 13 of Dancing with the Stars sent its first couple of the season packing Tuesday night and we had to say goodbye to the wild and crazy antics of the man formerly known as Ron Artest. 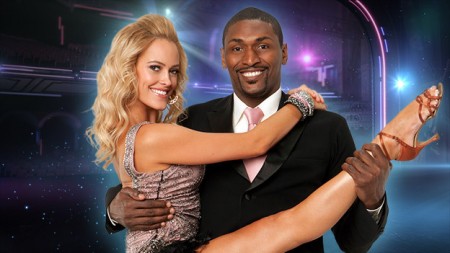 Here’s how it went down…

The first couple of the night saved was Team D-Rickilous — Ricki Lake and Derek Hough, followed by Elisabetta Canalis and Val Chmerkovskiy, Hope Solo and Maks Chmerkovskiy and Kristin Cavallari and Mark Ballas.

The next set of lucky contestants saved to dance another day were Chynna Phillips and Tony Dovolani, JR Martinez and Karina Smirnoff, Chaz Bono and Lacey Schwimmer, David Arquette and Kym Johnson and Carson Kressley and Anna Trebunskaya.

Rob Kardashian and Cheryl Burke were the first couple of the night put in jeopardy, and joining them were Ron Artest and Peta Murgatroyd and Nancy Grace and Tristan MacManus.

The first couple sent back to safety was Rob Kardashian and Cheryl Burke, followed by Nancy Grace and Tristan MacManus.

Ron Artest, a.k.a Metta World Peace, and Peta Murgatroyd were the first to leave the ballroom.

What did you think of the first Dancing with the Stars elimination of the season?