As Modern Family heads into season 3, SheKnows chatted with the kids in the cast to see how their lives are progressing on and off screen.

Sarah Hyland (Haley) is the glamour girl. Ariel Winter (Alex) has the smarts. Nolan Gould (Luke) is a jokester. And Rico Rodriguez (Manny) is, well, suave. 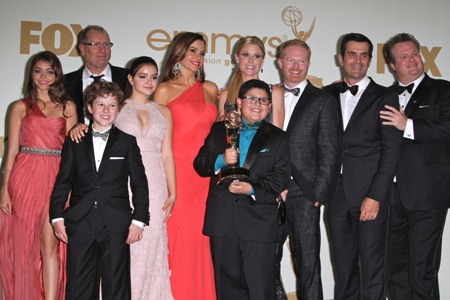 SheKnows chatted with Modern Family’s four “kids” at the 2011 Emmy Awards this weekend and we were surprised to find out that they are quite similar to their stereotypical characters.

See what each had to say about this season…

Like her studious character, Ariel told SheKnows that in her free time, she’s very focused on school.

“I’m still in school and I’m working really hard at it,” Ariel told us. “I think education is incredibly important.”

But this season we’ll see some changes in Alex. Ariel tells us that for the first time, she and Sarah’s boy-crazy character will actually have something in common.

“She might kiss a boy,” Ariel revealed. “She might get some boyfriends. She might sit at the same table as her sister at lunch. She might be in the same class with her sister. They might have the same problems at school.”

Insert “will” for the “mights” and we’ve got an interesting story line ahead! Off-screen, Ariel says Sarah also plays the big sister role.

“She has a different kind of life,” says Ariel. “She has a boyfriend and she lives on her own. We definitely have a bond though. She helps me out with sister things and gives me advice.”

Up next: Sarah Hyland talks about college, her dress and gives a shout out to her boyfriend >>