David Arquette made his Dancing with the Stars debut last night to glowing reviews from the judges, but what made him most proud were the proud looks from two of his favorite girls, wife Courtney and daughter Coco. 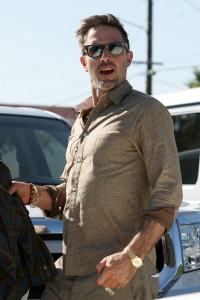 David Arquette took on his first dance on Dancing with the Stars and had his two best girls by his side — wife Courtney Cox and daughter Coco.

The two most important women in his wife were ringside to cheer David on as he danced with professional partner Kym Johnson to a dazzling Viennese waltz.

Arquette’s footwork did not go unnoticed by the judges. Said head judge Len Goodman, “I was very impressed. You’re a dancer.”

Also giving positive comments was judge Carrie Ann Inaba, who stated, “I really liked it, there’s something about you. All you need to do is relax a little bit.”

After his dance was over, Arquette blew kisses to both Courtney and Coco for their support. Arquette couldn’t stop talking about his daughter, stating, “She’s just so beautiful, she’s the love of my life.”

An excited Coco could hardly contain herself as she seemed thrilled that her father mentioned her on television.

Cox and Arquette have been amicably separated for a year. Back in October 2010, the two released a statement which read, “We have agreed to a trial separation that dates back for some time. The reason for this separation is to better understand ourselves and the qualities we need in a partner and for our marriage. We remain best friends and responsible parents to our daughter and we still love each other deeply.”

The statement continued, “As we go through this process, we are determined to use kindness and understanding to get through this together. We are comfortable with the boundaries that we have established for each other during this separation and we hope that our friends, family, fans and the media also show us respect, dignity, understanding and love at this time as well.”