A never-before-heard interview of Elvis Presley is being released in a five-disc box set this month. Get a sneak peek of this vintage interview, where the King of Rock and Roll talks love, family – -and why he can’t sit still when he sings.

A recording of Elvis Presley talking about his famous moves and loneliness will be released in the Elvis 1956 deluxe package, a five-disc box set that will be released on September 27th. It is so interesting to hear Elvis talk about life at age 21, before he had actually made it big…or should we say, before he made it huge! 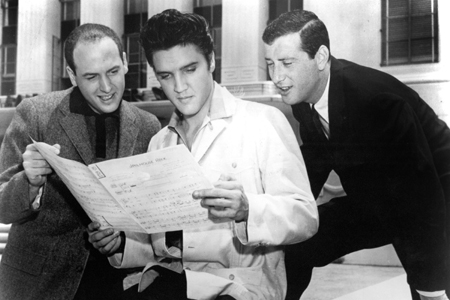 “The first thing people want to know I why I can’t sit still when I’m singing,” he says in the recording. “Some people tap their feet, some people snap their fingers, and some people just sway back and forth. I just sort of do them all together, I guess. I watch the audience and we are getting something out if our system and no one knows what is is. The important thing is we are getting it out of our system and no one is getting hurt.”

Presley famously fell in love with Priscilla Presley when she was just 14 years old — they eventually got married and had one child, Lisa Marie Presley, together in 1968. In the interview he talks about falling in love — long before he met Priscilla.

“Am I in love? No. I thought I’ve been in love, but I guess I wasn’t. It just passed over. I guess I haven’t met the girl yet, but I will,” he says. “I get lonesome sometimes. Even in the middle of crowd.”

He also talks about having a family one day. ” I don’t smoke and I don’t drink, and I love to go to movies,” he said. “Maybe someday I’m going to have a home and a family of my own, and I’m not going to budge from it. I was an only child, but maybe my kids won’t be.”

He also talks about another love — cars. “The first car I ever bought was the most beautiful car I’ve ever seen,” he says. “I parked it outside of my hotel the day I got it. I sat up all night just looking at it. And the next day, well, the thing caught fire and burned up on the road.”

Want a sneak peek before it hits shelves later this month? Listen to a portion of the Elvis Presley recording on People.