It’s the moment you’ve been waiting for, the third installment of the Paranormal Activity series — and this time everything is going to be explained. 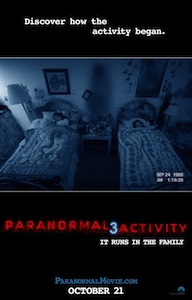 Paranormal Activity 3 started a new phenomenon in low-budget horror films. The film stars relatively unknown actors and takes place in only a few locations. Audiences haven’t seen this kind of innovative approach to the modern horror on a shoestring budget since 1999 cult sensation, The Blair Witch Project.

The series tracks an evil spirit that has attached itself to a couple who lives in a suburban house in the first Paranormal Activity. The first movie had a mysterious ending and left many unanswered questions.

The sequel, Paranormal Activity 2, is actually a prequel, in that it picks up the story before the couple moves into the house, so audiences can see where the spirit came from. That one ended with as much confusion as the first movie and now in the third installment, audiences will find out, hopefully, how the spirit attached itself to this family by going back in time to when the girls were children.

Check out the new poster for Paranormal Activity 3 to get a first look into the twins’ bedroom. The prequel hits theaters just in time for pre-Halloween fright on Oct. 21.