Hugh Jackman has a character flaw? It can’t be! What could the song and dance man — who’s tough as nails and also an adoring father — possibly be lacking? The actor’s wife weighs in. 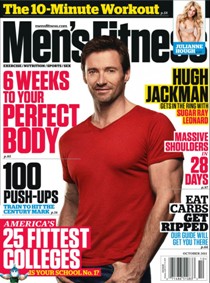 Hugh Jackman may be one of the acting world’s most talented men, but that doesn’t mean he’s perfect. The Wolverine star and winner of the 2008 People Magazine “Sexiest Man Alive” crown often gets busted by his wife of 15 years for one character trait he just can’t ‘man up’ on.

“Honestly,” the reporter says to Hugh, being careful not to fall for his trademark charm and Australian accent. “When was the last time someone called you an [expletive]?”

The 42-year-old, who is also the father of two adopted children, laughs heartily taking the crude question in stride. “I don’t really know,” he replies. “I’m a bit of a people pleaser, unfortunately. My wife says it’s hard to be married to me. She wishes I were more of an [expletive].”

Say it isn’t so! Though he may be lacking in the jerk category, Hugh Jackman is in tip top shape at 42 and took to the WWE ring in Monday’s Raw SuperShow against Dolph Ziggler.

“We all know that underdog is just another word for loser,” the wrestler told the actor. “And just like people that meet you, losers lose!”

“I love an underdog so much that I’m going to go back into the locker room,” replied Hugh Jackman, exemplifying his nice streak. “I’m going to find the biggest underdog I can find, and I’m going to help him to come out here and have the upset of his life and humiliate you in a match!”

Here’s a peek at the testosterone filled fight.

Do you think Hugh Jackman should heed his wife’s advice?