Gay men and women can now serve openly in the military without fear, thanks to the end of Don’t Ask, Don’t Tell. See how Lady Gaga, Ellen DeGeneres and Jane Lynch are celebrating!

Tuesday at midnight marked the end of the U.S. military’s policy of Don’t Ask, Don’t Tell, regarding homosexual soldiers. The policy — voted out of favor by politicians last Dec. — meant that military personnel couldn’t disclose or question sexual preferences. 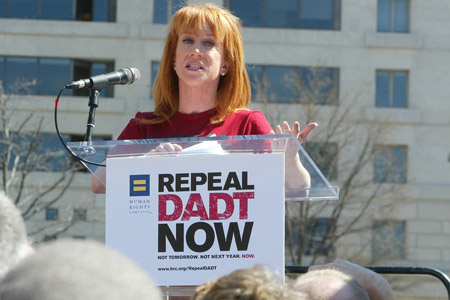 Now, that’s all over. Members of the military and civilians are heralding the end of the policy in various ways — one soldier even came out to his father in a poignant YouTube video.

Others — like celebrities — are using Twitter to express their happiness. Kathy Griffin was among the most outspoken celebrities before it was repealed; now, tons of celebrities are weighing in with their feelings.

Wanda Sykes agreed. “Congratulations to all of our service members who can now truly be all that you can be. #DADT was a hot mess.”

Lady Gaga has been outspoken about the repeal of Don’t Ask, Don’t Tell for some time — she even brought gay soldiers with her to the 2010 MTV VMAs.

“Can’t hold back the tears+pride. We did it! Our voice was heard + today the Senate REPEALED DADT. A triumph for equality after 17 YEARS,” Mother Monster tweeted after it was repealed.

“What a tremendous & beautiful day, DADT is officially repealed & the new order is in place. Sending all my love&gratitude to service members,” Gaga said.

Glee star Jane Lynch recently spoke about her marriage in The Advocate — now she’s heralding the end of DADT.

How do you feel about the end of Don’t Ask, Don’t Tell?