Nicole Scherzinger had difficulty keeping Conan O’Brien focused on the conversation – because he was too busy staring at her cleavage! Watch the hilarious interview here.

Nicole Scherzinger was a guest on Conan O’Brien’s talk show on Monday to talk about her new show, X Factor, but their conversation was more focused on her cleavage. The Pussycat Doll singer wore a tight leopard-print dress that was low-cut, revealing lots of cleavage – and Conan noticed right away. 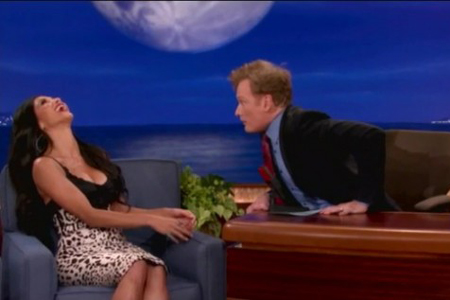 “You look fantastic!” he said. “Can you sit down? Your dress is painted on! “

“I feel like a sausage,” she joked, while sitting down.

“Well, you may suffocate, but you look fantastic,” Conan quipped back.

Scherzinger started talking about the X Factor – then she stopped mid-sentence after noticing Conan’s downward gaze and said, “Focus, Conan.”

“I’m sorry! I’m sorry!” he said as he held flowers from his desk in front of her cleavage. “Good god!” he said as he made a hilarious exaggerated movement looking at her chest. “I just threw my neck out!”

The conversation naturally flowed to Simon Cowell’s man boobs or “moobs,” as she calls them. As she talks about them, she starts gesturing to her own chest – which Conan exclaims, “Now I have to look!”

Boob-talk aside, she ends the interview with a great impression of Britney Spears!