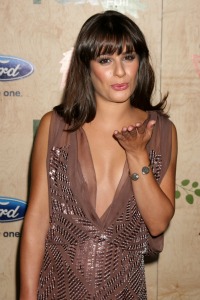 Lea Michele is a little less Glee-ful today after splitting from her boyfriend Theo Stockman.

The couple, who were together for over a year, shared a love of musical theater. Stockman is a Broadway actor and much of the couple’s relationship was long distance, which is the only clue we have to their split.

“This is not a dramatic breakup. The relationship just ran its course,” said a rep for Michele. “They are still friends and will always be friends.”

Rarely seen at events together, Stockman preferred the lights of Broadway to the glare of the LA paparazzi lens. They did walk the red carpet at the Time 100 Most Influential People party in May 2010 and were occasionally spotted in Los Angeles together.

The distance didn’t seem to bother Michele when she spoke to Glamour last year. She told the mag, “I’m a relationship girl.”

Some thought she made it sound as if she is someone in need of being taken care of by a man in an interview with Cosmo UK, saying, “My father makes me laugh. My sense of humor comes from him, but at the same time, I know he’s going to take care of everything. I see some of that in my boyfriend.”

In addition to her breakup, the actress will be out of a job when her Glee character graduates at the end of this season.